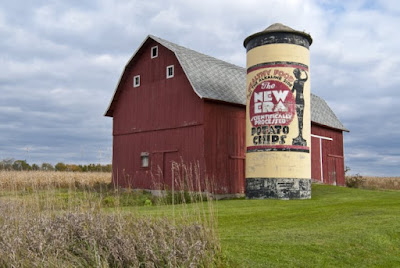 
A giant silo-sized can of New Era potato chips!

This barn's silo in Portland, Michigan was converted to a New Era can in 1950. Soon after, the nearby Interstate-96 opened in 1957 and siphoned off most of the traffic from the highway. The company declined to renew the two-year contract and painted the silo grey after its expiration.

Rain and snow eventually washed off the grey paint and the silo once again became the roadside munchie king (queen?). Around 2004 the owner's brother restored the potato chip can paint job and it looked brand new again. However, Michigan weather has not been kind and continues to "chip" away at the paint. Even so, it has to be the coolest looking silo anywhere. Pin It Now!
Posted by JCR at 9:59 PM
Email ThisBlogThis!Share to TwitterShare to FacebookShare to Pinterest
No comments:
Labels: barn, Michigan, New Era, pototato chips, silo, vintage sign

Misuse and abuse of the English language is one of my pet peeves. I cringe (and usually shout) in anger and frustration every time I hear "nuclear" pronounced "nuke-u-ler," and Brett Favre pronounced "FARVE." I did a Google search to find out why this occurs. I didn't get an explanation from "FARVE" himself, but I did find an article by a linguistics expert on eHow.com. (She has a BA in Journalism from Oakland University, and an MA in Linguistics from Wayne State University and lives in Beverly Hills, Michigan). The first part of Step 2 is what I've suspected all along:

How to Pronounce Brett Favre's Last Name
By laurapayne


Sportscasters and fans alike, when talking about Brett Favre, pronounce his last name as “Far –Ve.” But if you pause for a moment to look at the spelling of his last name, you will notice it does not seem to match up with the pronunciation. So how should his name be pronounced and is there a correct way?

Step 1
Understand that when people pronounce Favre as “Far –Ve,” it is a linguistic phenomenon called “metathesis.” Metathesis occurs when two neighboring sounds in a word switch places.

Step 3
If the phenomenon of metathesis is removed from the phonological equation, the name Favre should be pronounced “Fav-Re.”


Another commonly mispronounced (if not metathesized) word is "kiln." The original and proper pronunciation is KILL, but the word has been mispronounced KILN for so long by so many that dictionaries now accept both pronunciations as correct, and "KILN" is often listed first and "KILL" as alternative.

I mention "kiln" in this discussion because of this bit of bio info about Brett Favre on his official web site http://www.officialbrettfavre.com/bio/ :

Funny that "Favre" is pronounced 'FARVE," yet they make a point about the correct pronunciation of the town, Kiln.

In the same vein, two other examples of mispronounced city names come to mind:

One would think New Madrid, Missouri is pronounced New "Ma-DRID" like the city in Spain, but locals insist it is New "MAD-rid."

One would also probably - and logically - think the pronunciation of Lake Orion, Michigan would be the same as the constellation, "Or-ION." But you'd be wrong again, as locals say "ORY-on."

(Are these examples of metathesis, or does another term exist to describe these colloquial mispronunciations?)

The English language is a lot of things, but dull isn't one of them!


OK, if F-A-V-R-E is pronounced "FARVE," then it is only reasonable to apply that "logic" to his entire name. So, from now on I'm pronouncing Brett Favre, "BERT FARVE".


Pin It Now!
Posted by JCR at 2:46 PM
Email ThisBlogThis!Share to TwitterShare to FacebookShare to Pinterest
No comments: