The enormous 35-acre Packard site made news throughout 2013. Vagrants caused several fires, and scrappers continued to pick its bones of structural steel causing the collapse of several sections of different buildings. In July Bill Hults, a would-be developer from Chicago, made overtures to purchase the site, but failed to produce the money.

In October the entire site went on the Wayne County auction block. A high bid of over $6 million dollars was made by a Texas doctor who  put up about $200,000 in earnest money, but ultimately failed to comply with the auction process and forfeited the cash. The property was then awarded to the next highest bidder, who turned out to be the Chicago developer whose bid was $2 million. He put $100,000 down to secure his bid, but again failed to produce the money. The property was then awarded to Fernando Palazuelo, a developer from Peru whose $405,000 bid was the 3rd highest. 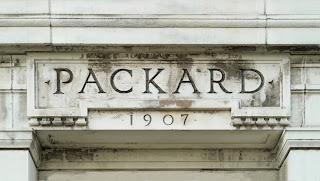 
The photo above was taken just days before the entire entrance facade was removed from the building and shipped to America's Packard Museum in Dayton, Ohio. This piece of Detroit's automotive and architectural history may be gone, but it is available to you as a 10" x 20", 12" x 36" or a nearly life-size 20" x 60" canvas gallery wrap photographic print. Each canvas has a solid substrate to prevent warping, is 1 1/4" deep, has a finished back with wall bumpers and hanging hardware already installed.  A "must have" for any Packard owner or enthusiast !

Pin It Now!
Posted by JCR at 5:29 PM
Email ThisBlogThis!Share to TwitterShare to FacebookShare to Pinterest
No comments:
Labels: Detroit, factory, Packard 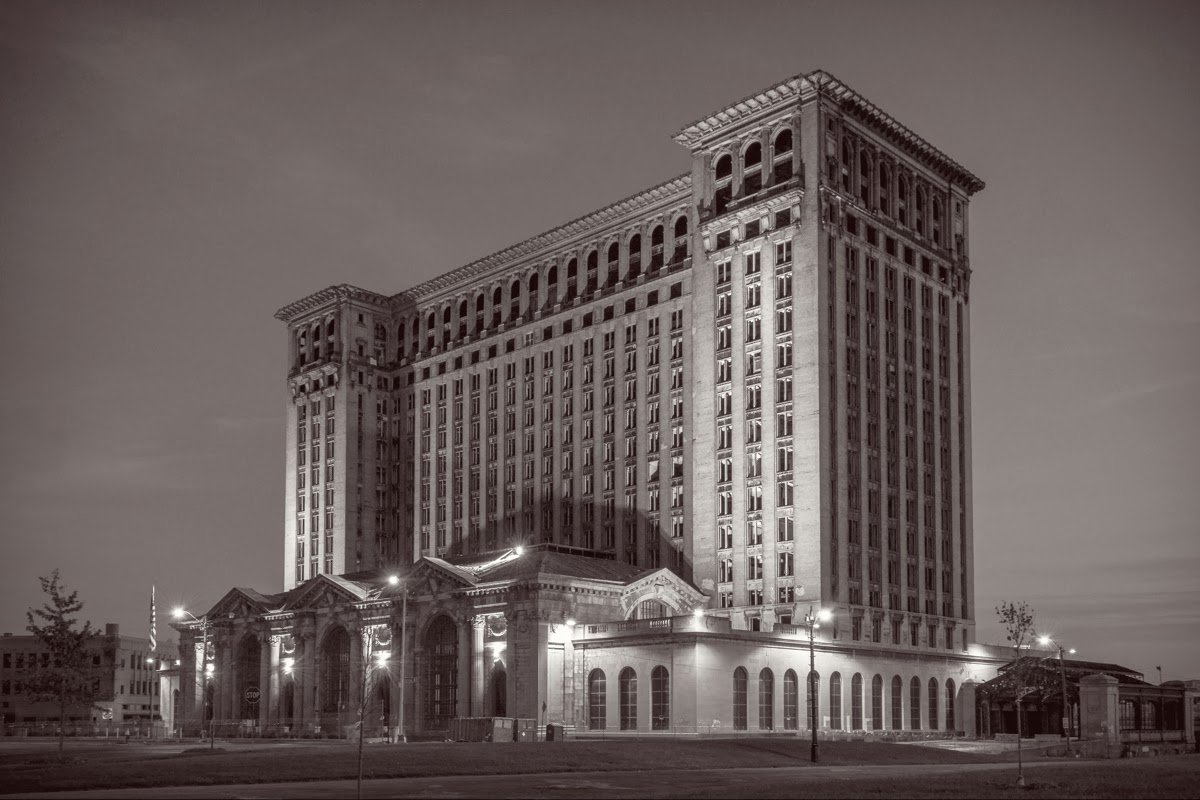 When Detroit's Michigan Central Railroad depot opened a century ago on December 26, 1913,  it was a majestic symbol of the city's grandeur and phenomenal industrial success.

It was the tallest railroad station in the world, and the fourth tallest building in Detroit. The Michigan Central Railroad (a subsidiary of William Vanderbilt's New York Central RR) spent $16 million - about $332 million today - on the new station, office building, yards and the underwater rail tunnel, which opened on Oct. 16, 1910. The cost of the station alone was about $2.5 million ($55 million today).

Today its hollow ruin has become an icon of the city's monumental decline.


From 1884 to 1913 the Michigan Central Railroad operated out of a depot in downtown Detroit at Third and Jefferson. In 1906 the company began constructing a tunnel under the Detroit River to Canada. To meet the demands of its growing business the railroad decided a new and much larger depot should be built nearby and began acquiring property in the Corktown neighborhood in 1908.

The new depot was to be formally opened on January 4, 1914, but a fire broke out at the old depot around 2 p.m. on December 26, 1913. The flames spread and it was quickly determined that the building was no longer usable. To avoid disruption of service, operations were hastily moved to the new building, and at 5:20 p.m. the first train departed for Saginaw and Bay City. An hour later its first inbound train arrived from Chicago.

Its only use in the last quarter century has been to serve as an easel for graffiti vandals, a makeshift shelter for vagrants, a target of scavengers and scrappers who have stripped it of anything and everything of value, a paintball shooting gallery, and an occasional set for apocalyptic films.


Read more about it here:
http://www.historicdetroit.org/building/michigan-central-station/