The Mystery of Novi's Name 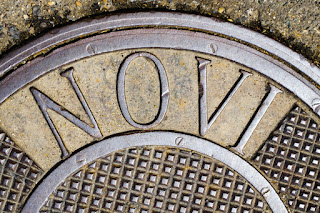 
It is documented that the area west of Farmington, Michigan was first settled by Erastus Ingersoll and several other families in April, 1825, one month before the opening of the Erie Canal. But, how Novi's name came to be is shrouded in mystery and myth. One common notion is that this place was the sixth stop, toll gate, or mail drop (No. 6, or, in Roman numerals, No. VI) along a road, railroad. or stagecoach line. This is completely false because the town was named and incorporated in 1830, and Novi's toll road was not built until 1855, and the railroad didn't arrive until 1861.

The story of Novi's name will probably never be determined with any certainty, but it is possible that it may have a Yugoslavian connection. In 1936 Novi officials received a letter from the Yugoslavian Consulate in Chicago saying many people in Yugoslavia knew of the town called Novi in Michigan. The letter related a romantic legend of a young soldier who fled to the U. S., and that his heartbreaking tale of lost love had influenced the selection of the name.

There is no documentation to corroborate this tale, but there may be a grain of truth in it. In the 1990s a Novi News reporter was vacationing in Croatia and took it upon himself to investigate a possible connection. He found no concrete clues to the city's name, but did find that the names of a large number of cities in the area began with "Novi," which translates to "new." Like the colonials who named their settlements New York, New Jersey, etc. in tribute to the home they left for a new beginning, this might also have been the case for Novi.

Pin It Now!
Posted by JCR at 6:00 AM
Email ThisBlogThis!Share to TwitterShare to FacebookShare to Pinterest
No comments:
Labels: manhole cover, Michigan, Novi

Home of the Novi Special 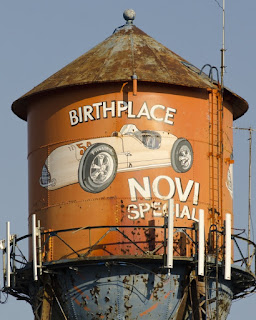 The Novi became an Indy icon without ever winning the Indianapolis 500.

Welch wanted a V8, and asked that it be named after his home town of Novi. In 1940 a 3.0L supercharged Novi engine was designed by Leo Goosen, America's only full-time racing engine designer. It was built in legendary racing engine builder Fred Offenhauser's shop.

Almost miraculously, the Novi engine was ready for the 1941 race. It was rated at 450 horsepower when a typical Offenhauser had 300 hp. The front-drive Novi was always heavy, thirsty and hard on tires. It qualified in 28th place at 120.5 mph. Ralph Hepburn finished 4th in the race without any trouble.

When racing resumed after WW II in 1945, Welch had Goosen design a new front transaxle that allowed lower engine mounting. Frank Kurtis produced a new chassis and a low, sleek body, and the car, not just the engine, was now called the Novi. Hepburn qualified for the 1946 Indy 500 in the Novi Governor Special at 134.2 mph. No car had ever done more than 131 mph.

Despite being placed 19th on the grid because of late qualifying, the Novi was thought to be a sure winner. Hepburn led the pack by lap 12, but brake problems caused a long pit stop on lap 56 and he dropped to 13th position. He fought his way back up to 4th place, but a broken valve knocked him out of the race on lap 122.

The two Novi Governor Mobile Specials qualified in 1947. One broke a piston on Lap 62, and the other finished fourth.

Tragedy struck in 1948, when one of the Novi Grooved Piston Specials hit the wall in qualifying, killing Hepburn, thereafter branding the Novi as jinxed. Dennis (Duke) Nalon took over and qualified fastest at 131.7 mph. Nalon drove well, but could only finish third because of a refuelling glitch. It would be the Novi's best finish.

In 1949 Nalon qualified first and Rex Mays second but the jinx struck again when Mays' engine failed and Nalon hit the wall during the race. The Novis failed to qualify in 1950 but were back for 1951, when Nalon broke all records, gaining the pole at 136.7 mph. Chet Miller's Novi also qualified but neither of the cars finished.

Nalon and Miller returned in 1952, with Miller stunning Indy with a fastest-ever 139.1 mph qualifier. However bad luck struck again with both Novis breaking their supercharger driveshafts during the race. As a result, stronger supercharger drives were installed and the inter coolers removed on both cars for the next season.

Miller was killed in 1953 when he hit a wall while attempting to qualify at 140 mph. This took the heart out of the team. Nalon qualified, but he was never a contender, and spun out on lap 191. This would be the last race for a front-drive car at Indy as the Novis failed to qualify in both 1954 and 1955.

For 1956, the Novi engines were fitted to a Kurtis rear- drive chassis. New rules in 1957 reduced displacement to 2.7L. Many modifications were tried, but in 1961, after 20 years of attempting to win at Indy, Lou Welch sold the Novi assets to Andy Granatelli of Studebaker's Paxton supercharger and STP additive divisions.

Granatelli and his crew squeezed more than 700 hp out of the Novi but still failed to win. In 1964 Granatelli switched from front to four-wheel drive which proved inconclusive - and moot. The advent of new, stickier tires and the change to rear-engined cars made four-wheel drive unnecessary.

The Novis did not finish in 1964 or '65, and failed to qualify in 1966, ending the exciting but ill-fated Novi's odyssey that had promised so much but delivered so little.