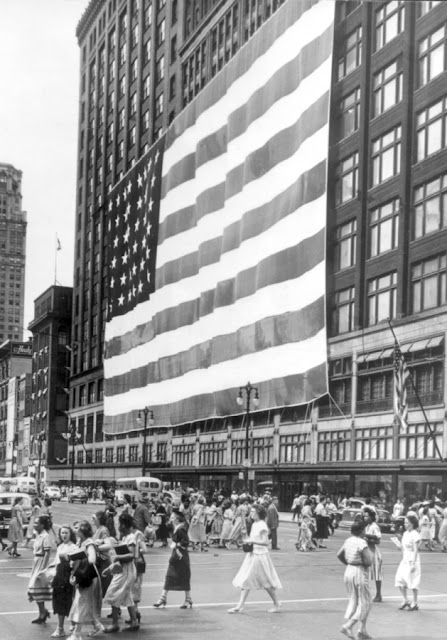 On Armistice Day 1923, Hudson's unveiled an enormous American flag on the Woodward Avenue side of the store. It measured 90 ft. high x 230 ft. long with eight-foot wide stripes and five and half-foot stars.

Along with its regular Flag Day, 4th of July and Armistice (later Veterans') Day duty in Detroit, the flag was hung on the west facade of the U.S. Capitol Building in 1929, and displayed at the 1939 New York World's Fair before it was retired in 1949.

In 1960, to mark the statehood of Alaska and Hawaii the previous year, six seamstresses were required to construct the new 50-star field. Each star was 6 feet high, the stripes were 8 feet wide, and mile of rope held the flag in place. The huge flag was last displayed in 1976 to commemorate the nation's bicentennial. It was then retired and donated to the Smithsonian Institution, which gave it to the American Flag Foundation.

_____________
Update
I have just received further information about the fate of the Hudson's flag from Michael Hauser:

The American Flag Foundation received permission from Target Corporation (then owner of Hudson's, Dayton's and Marshall Field's) to destroy the flag.  It had deteriorated badly.

The Smithsonian kept the flag in storage, but never publicly displayed it, as it was simply too large.

In 2003, Target Corporation commissioned a new American flag to be displayed at Marshall Field's State Street flagship store in Chicago.  It is 5,000 square feet and measures 50 feet by 100 feet.  It was flown in the north wing of the State Street store and pretty much hung from the 11th floor down to the tops of the fragrance showcases on the 1st floor.


Mr. Hauser is co-author of these fine books: